The Weaver M1 bomb lift trolley was carried on the Chevy M6 bomb service truck and used to move bombs under aircraft that were low to the ground.

This is a new addition to Richard's collection. Purchased from Oregon, USA.

He has waited 20 years to find one of these Chevy M6 trucks complete with M5 Trailer and M1 Weaver Bomb Lift.

There were many of these Trucks at Debach during the war years. They were used to pull the M5 Trailer that carried bombs and ammunition to load onto the aircraft.

Richard's latest acquisition was found on eBay. It is a combination of a Chevrolet cargo truck and an M6 bomb truck. Watch this space for restoration progress. 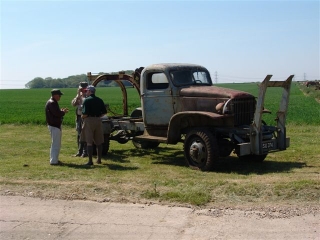