Take off at daybreak all routine – flying in ‘B’ group – when passing over the English Channel , an exhaust ‘stack’ on the left outboard engine ‘blew’. Lt. John Dewitt – pilot- decided to return to base before the situation deteriorated. The damaged engine burst into flames as they approached the base – due to low cloud they were already below a safe height to bale out and still carrying a full load – there were no alternatives. They had to land before the engine fire spread. As they made the final turn “ I saw the burning wing sag”. At this moment Lt. David Moore in the control tower announced over the tannoy “to all personnel – take cover”. Devils Own clipped the tops of the trees, the burning engine dropped out of the wing, straight ahead was a parked B17, the flight control black and white control caravan and a trailer full of ground crews. With considerable skill and landing on mud, with wheels up, the B17 hit the ground at 40mph. Four crew in the rear were ordered to jump from their escape hatch, the engineer, Navigator and Bombardier catapulted themselves out between the fuselage and the left inboard engine. The co-pilot went out of his window and I went after him off the right wing – running like hell. I was less than 500ft away when there was a terrific explosion. All the windows of the control tower were blown out, causing slight injuries and cuts. A section of the landing gear was blown over the control tower and was burning between two jeeps. The force of the explosion was so great, it lifted the metal doors off the nearby hangar.To quote Lt. Dewitt’s own account “The Good Lord was riding command pilot to-day”.

The destruction of ‘Devils Own’ was complete – not a single life had been lost but parts of the aircraft still surface on the site of the wreck at Debach Airfield. More original photographs can be seen in the gallery. 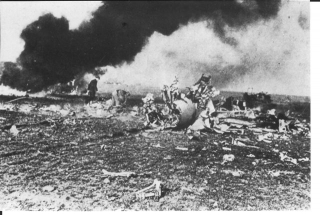 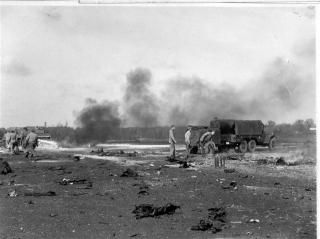 14th June 1944, mission no.6, eight days after the D-Day landings. Targets – German held airfields in France. Take off begins at 03.00 hrs and after a successful mission, aircraft begin to return to Base around 09.00 hrs. B24 Liberator No.41-29569 named “Cock of the Sky” allowed other aircraft to land first. With one engine out of action and significant flak damage. On their final approach to the runway at Debach, the ground controller realised that they were too high to make a successful landing and they were told to overshoot and approach again. They were heading towards Melton at about 1,000ft when it all went wrong. When they turned in the circuit pattern, the wing holding the dead engine stalled and the aircraft went into a spin and hit the ground. The crash as reported by the local police at 09.15 hrs – the machine was seen to bank sharply and roll on it’s back – crashing just behind St. Audry’s Hospital in the grounds of Foxborrow Hall. Petrol exploded and the machine disintegrated. The Fire Service from Woodbridge promptly attended followed by USAF personnel from Debach. The crash damaged only an acre of growing crops, farmed by Mr F. Smith of Woodbridge. Ten young men died that morning. They had only arrived at Debach a few weeks before. We that are left will remember, always. 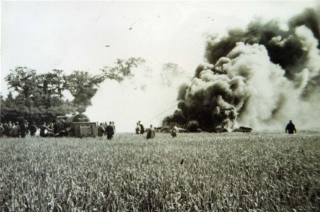 Cock of the Sky

“Mizry Merchant” ditched in the North Sea on 20th July 1944. The target of the day was Russelsheim-Mainz, Germany.
From the Mission Report:-
Aircraft 41-29561 turned back early when it lost an engine at the I.P. (causes unknown), jettisoned its bombs and later ditched in the channel. (From the report by Don Mackintosh, skipper of RML512 it appears that Mizry Merchant suffered a “massive loss of fuel, possibly through enemy action”)
The crew were recovered by Rescue Motor Launch No 512, unfortunately the bombardier, Carl McClendon, did not survive.

Following are two accounts of the rescue of the crew.
The first by Don Mackintosh, skipper of Air-Sea Rescue launch RML 512, and the second by engine room “stoker” Arthur Hickingbottom.

(Reproduced with kind permission of John Mackintosh, Brother of Don.)

A picture for you to use if you wish to, it was taken on Xmas day 1944. The crew of H.M.R.M.L 512 plus a few guests .I am on the end of the back row on the left side of the picture. During the rescue of the crew of Mizry Merchant our Coxswain pictured on front row fourth along on the right side of the picture, personally rescued an airman by jumping overboard and swimming out to him with a line. He was clinging on to wreckage which was the nose wheel but was not going to float for much longer, Cox managed to get a line round him and got him back to the ship. I was on duty in the engine room and had only a limited view through the portholes. We returned to base sadly carrying the body of the airman who was killed on impact plus 9 other survivors. Another piece of information you might be interested in, we were called up on (the) recently installed VHF radio by a P47 thunderbolt fighter being used on A S R searching, he guided us to the crash scene which was 11 miles away and at a max speed of 22 knots it took us nearly 20 minutes to arrive. Our two 750 hp Hall-Scott engines were busting a gut!
Best wishes Arthur Hickingbottom. 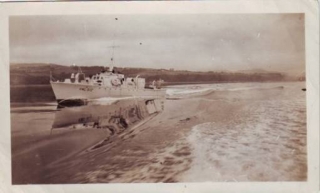 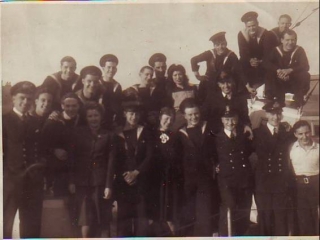