Aircraft of the 493rd BG 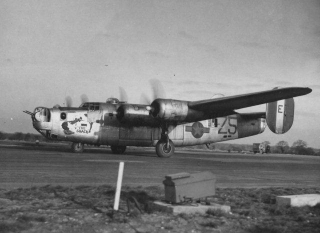 The first 50 missions flown from Debach were in the B-24 heavy bomber, designed by the Consolidated Aircraft Company of San Diego, California.
The “Liberator” had the distinction of being the most produced allied aircraft in WWII, with over 18,000 being built. At one point they were rolling off the production lines at 1 aircraft per hour, thanks largely to the Willow Run Facility, the Ford Motor Company’s newest and largest production line in Detroit, Michigan, although they were also built in Oklahoma, Texas and of course in San Diego.
The 493rd BG were issued with brand new aircraft, collected from the factories, to be flown over to England. On arrival, the first job was to remove most of the heavy armour plating, designed to protect the crews. This plating reduced the bomb load that could be carried and at the time was considered to be unnecessary – this view was soon changed and some of the plating was later refitted in the critical areas. The aircraft were named and nose art applied, at the personal expense of the crews (more often the Pilots), individual crew members regularly “named” their gun positions after loved ones. Then, before a single mission was flown, some of their lovingly prepared aircraft were taken away from them and replaced by “battle experienced” aircraft previously used by other groups, so the process began again.
The first mission flown in the B-24s was on the 6th June 1944 – “D-Day” assisting the ground troops.
In Late July the ball turrets were removed from most of the B-24s in an effort to increase the speed of the aircraft so the crew, who had trained together, lived together and flew their first missions together, had to lose one of their number. In some cases it was the ball turret gunner who left. In other crews the decision was made amongst all of the gunners on board, often by the roll of the dice, or the cut of the cards. Whilst a lot of these “aircraft less” gunners went off to join other groups, some stayed at Debach, either as “spare gunners”, or went to work in the armories preparing the guns for their colleagues, many returning to flying duties with the arrival of the B-17s.
The last mission the 493rd BG flew in B-24s was on August 28th 1944, to Kiel in Germany. 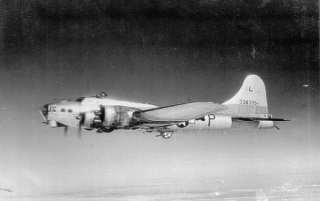 During late August and early September the air crews and their ground support teams went through a transition period training to fly and maintain the B-17G “Flying Fortress”. Often the initial transition training for the pilots consisted of little more than a few circuits of the airfield with some “touch and go’s” thrown in for good measure, with an instructor, and then they were left to get on with it, learning the new aircraft as they went. Several accidents were credited to forgetting to flick a switch – with the excuse of “we didn’t know it was there” being the accepted answer. It was a credit to the crews that they were ready to return to flying combat missions on the 8th September 1944, attacking an Ordnance factory in Mainz Germany. The B-17G was the newest, and most produced, variant of the B-17 bomber designed by the Boeing Company. Over 4,000 aircraft rolled off of the Boeing Production lines. Two other companies, Douglas and Vega, also built these aircraft, between them turning out approximately half of the final production number. Although only just over 12,700 B-17s, of all variants, were built, they carried almost half of the total bomb tonnage, by all U.S. aircraft, dropped on Germany. Designed for a crew of 10 the major change, at least for one member of the crew, was that the navigator now had a seat! and moved from the cockpit down into the nose of the aircraft with the bombardier. With the introduction of new electronic navigation aids the ball turrets on some aircraft were removed and replaced by radar domes, these aircraft were the pathfinders. The ball turret gunner being replaced by the “Mickey” (or radar) operator. Amongst the many bombing missions carried out by the 493rd BG, the B-17G was also used to drop food for the Dutch in “Operation Chowhound” on 6 occasions, and 4 times the group flew to Horsching in Austria to bring released POWs back to France, each time carrying 30 passengers.

It was very unusual to have a P47 Fighter plane at a bomber base. Col Robert Landry, who had previously been in command of the 56th Fighter Group,and later to become Executive Officer of the 93rd Combat Wing, joined the 493rd BG as Commanding Officer in February 1945. He brought with him, to Debach, a P-47 Thunderbolt for his "personal" use. This aircraft was usually parked on the hardstanding near the control tower.

There are numerous sites on the internet that give all the technical specifications of these aircraft and putting “B-24” or “B-17” into your favourite search engine will give far more information than we could hope to post here – but please remember to come back to us and see what else we have to offer.