Other Duties
Personnel of the 493rd also served elsewhere

In the early days the 493rd BG supplied all of the aircraft and crews for each of the missions and visual bombing techniques were employed. However as autumn approached, the European weather systems decided they would play a part in making this method extremely difficult. “Heavy cloud cover” and “10/10 Undercast” were terms that were regularly used in the mission reports when targets could not be pinpointed. Fortunately the advances in “Electronic Navigation” and RADAR came to the rescue in the form of the “Pathfinder” (PFF) aircraft.Because of the new technology, the 493rd BG was unable to service its own fleet of PFF aircraft, so would “borrow” aircraft and crews from other groups, primarily the 34th BG, 486th BG and the 96th BG. Initially an aircraft commander would be supplied to fly on these lead aircraft and direct the operations. As training facilities became available a selected number of crews were designated pathfinder crews and as such were required to leave Debach and join the other groups on a “Detached Service” basis. Up to 90 men could be serving off station at any time. They would fly the Pathfinders normally only on missions being flown by the 493rd BG and would meet up with their colleagues during the formation assembly process. Servicing of these aircraft was carried out by personnel of the operating station.As ground facilities and maintenance training was enhanced, by December 1944 the 493rd BG was operating and maintaining its own fleet of specialised Pathfinder aircraft so the Detached Service crews could return home to Debach.

Although Debach airfield was relatively new, from the early days there were problems with the perimeter track and runways breaking up, with regular repairs being made. Between August and October 2 units 0f the 829th engineers were on site carrying out major repairs to the taxiways and runways. After the particularly harsh winter of 1944-45 the runways could take no more and with the growing number of take-off and landing accidents caused by the break up the decision was made to re-lay the 3 runways, and a substitute base for the aircraft was needed.
AAF Station 165 “Little Walden” proved to be ideal. Originally constructed to be used as a “Class A” airfield it had recently been vacated by the 361st fighter group, who were temporarily deployed to Belgium.
For 2 weeks prior to the change over, Officers and enlisted men prepared station 165 for the arrival of the aircraft and support personnel. On March 1st 1945 the aircraft took off from Debach on a mission to attack the tank part manufacturing plant at Uim, Germany. As soon as they were in the air the ground crews began the mammoth task of transporting the necessary equipment from Debach to Little Walden. A huge convoy carried all of the essential supplies and personnel that would be required in their temporary home. Fortunately there were no delays or mishaps en route and thanks to the outstanding efficiency of all concerned Little Walden was ready to receive the aircraft when they returned from Germany.
Little Walden was to serve the 493rd BG for the month of March whilst the runways at Debach were ripped up and re-laid. Over two thirds of the 493rd compliment were based there, with only the essential services and those sections that could be operated from a distance remained at Debach for this period. All of the aircraft servicing, maintenance and armament & ordnance sections, the medical, fire and administration sections plus everything else required for the day to day operation of a heavy bomber group were established at this remote field. A regular shuttle service was run between the two airfields to ensure the efficient operation of both bases.
20 combat missions were flown from here and on the last one, on 31st March 1945, after the last aircraft had taken off for the mission to Brandenburg, Germany, the convoy once again rolled along the roads back to Debach. Again no vehicles (or personnel) were lost en route and the mammoth task of preparing to receive the incoming aircraft began. Once again, as the first aircraft landed on the freshly laid runway at Debach the ground crews were ready to receive and service them.
Throughout the period from Mid February to the end of March not one day of operational activity was lost due to this move and is testament to the efficiency of the planning and the personnel who carried out the move and continued to operate the aircraft as if nothing had changed. 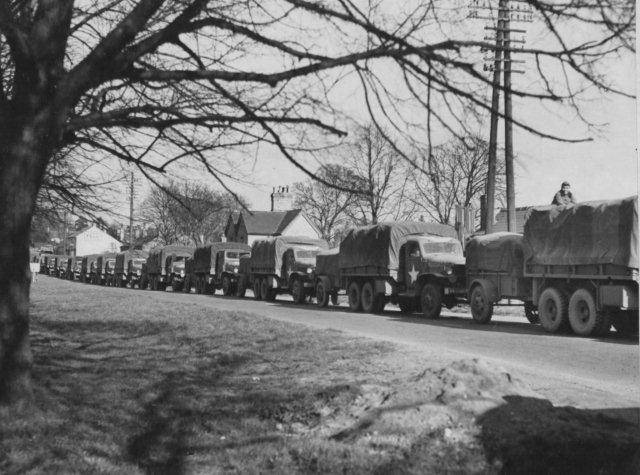 the convoy once again rolled along the roads back to Debach

On 17th February 1945, an initial roster of 7 officers and 176 enlisted men of the 862nd BS left the 493rd BG to become attached to the 55th Fighter Group as part of the 3d Scouting Force, based at Wormingford in Essex. 8 new B-17s were assigned to the group and along with existing P-47s and P-51 Mustangs along with their Pilots and support crews, the 3rd Air Division Scouting Force was complete.Stripped of most of their armament the aircraft (B-17s) were crewed by a Pilot, co-Pilot, Navigator, Engineer, Radio Operator, Tail Gunner and a meteorologist. Up to 6 B-17s and multiple single engined aircraft would be required on any mission acting as weather observation ships, as well as performing radio relay duties for both Bomber and Fighter escort groups.Numerous trips were also made to Ireland, Paris, Scotland and other destinations to ferry personnel on official Business and on furlough. Several missions were "Classified".In April alone, 140 missions were flown by the 3d scouting force, with multiple B-17s being used on 22 occasions. During this month the Intelligence section held "special studies" for the Pilots and Navigators who were expected to take part in the pending "Revival Missions"

The 862nd BS went "off operations" on the 7th May 1945, after flying scouting missions for the "Operation Chowhound" food drops in Holland, and, after the announcement of Victory in Europe on the 8th May, the squadron again underwent a complete change. The 3d scouting force was to be de-activated, so the ground personnel packed up in preparation for the move to rejoin the 493rd BG. The flying crews were sent to the 70th Re-enforcement Depot to await transportation to the Zone of the Interior.On the 17th May 1945 91 Officers and 371 enlisted men returned to Debach, where the 862nd BS was again re-established as a bombing squadron.